Ruchika has worked in IT for more than twenty-five years, but her passion is performing. Her acting journey began in college with musical theatre, she then embarked on screen acting in 2018 and since then has starred in five feature films, more than fifteen short films and three television shows.

Read on to get to know a bit about Ruchika and her part in Maanika and the Wolf.

Can you share a little bit about yourself and your part in Maanika and the Wolf?

I am originally from India and I’ve lived in Wimbledon with my husband for over five years. I have done a lot of film work including short films, movies, TV shows, commercials, corporate films and some musical theatre as well. I worked with Catherine Tate in ‘Nan: The Movie’ which was a lot of fun.

I have two daughters who are twenty-five and twenty-six and I enjoy spending time with my family, working out and Zumba.

Maanika and the Wolf is my first solo theatre performance and I play Maanika, a woman who has an interesting history and a special relationship with her granddaughter Ruby. 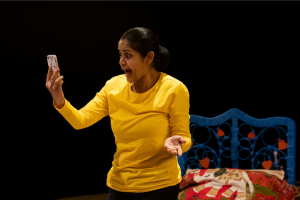 What is most exciting to you about being a part of this production?

For me, the devising process has been the most exciting part of this production. We had a basic sketch of the story when we started rehearsals but over time the plot has evolved based on inputs from the team, so it is amazing to compare where we started with where we are today! 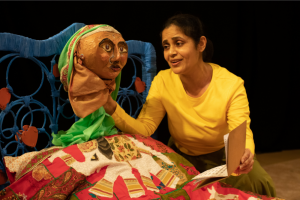 What do you think people will most enjoy about the show?

I think what people will enjoy most is the fact that the production is not being performed on a standard stage. The audience is going to be sitting all around me, so they’ll have the benefit of me speaking to them (sometimes) and seeing the lovely set and props up close. It will be more like an immersive experience! 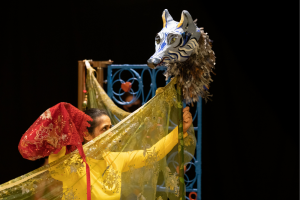 There’s lots of props in the production which Maanika uses to help with her storytelling, which one is your favourite and why?

I think my favourite prop is the Wolf mask because it gives me the opportunity to change into a completely different character and plays such an important part in the story. It’s very beautifully painted and conveys just the right amount of menace to the audience! 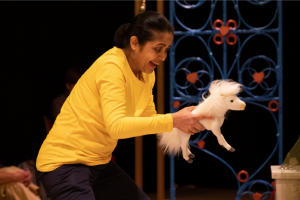 What advice would you give to budding young creatives?

My advice to budding young creatives is to come on set with an open mind, without any pre-conceived ideas or thoughts about how they are going to perform. Characters always evolve over a period of time. A really strong character is built by incorporating elements both from the performer’s life experiences as well as the story itself. 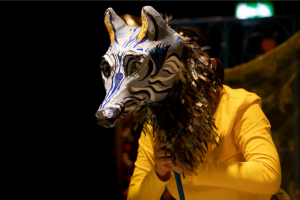 Maanika and the Wolf is being performed at Polka’s Pop-Up Theatre space in Wimbledon’s Centre Court Shopping Centre from Thursday 29 July – Sunday 29 August. With a specially composed soundtrack, enchanting set and glittering props, Maanika and the Wolf promises to be a captivating experience for you and your children. Click here to find out more and book your tickets.