We are proud to be a community hub for Merton. A place where children can connect with their family, peers and the wider world around them. Polka provides an inclusive place to create, share your voice and enjoy activities close to home.

Members of our diverse local community are invited to participate and experience live theatre, through creative projects, both on and off site, and ticket schemes that enable access to new audiences. Polka’s workshops, including storytelling sessions, puppet making and devised plays, are delivered in a variety of settings including Children’s Centres, libraries, community centres, church halls and temporary accommodation for families. Our community work includes participants from 6 months through to singers in their 90s who are members of the RE:Sound intergenerational community choir.

If you would like your community organisation to get involved or would like information about subsidised places on our Take Part workshops please contact Community Engagement Manager, Fran Chabrel 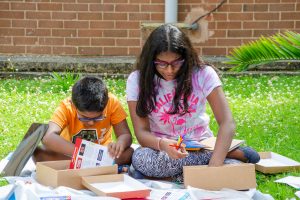 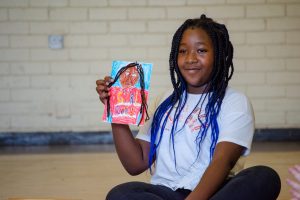 100 Selfies was a project that took place in various community locations in South London during Summer 2021.  100 children were given a box containing art and craft resources, which they used to create a self-portrait.  These 100 images have been collated together to form a large image of a figure jumping on the wall of the café which matches similar figures in the building.  The project was linked to our reopening productions, Maanika and the Wolf and RED, which were both inspired by the story of Little Red Riding Hood.  During two drama workshops, the children explored this story, considering how characters are represented and possible reinterpretations of this well-known tale.

Families from these organisations, who took part in the project, were offered tickets to see Maanika and the Wolf and RED.

‘The workshop was very interactive.  My son enjoyed himself.  He was able to be his confident self.’– Parent 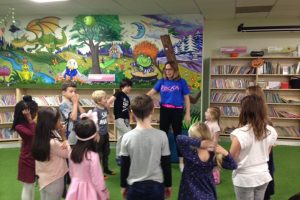 Coming to a library near you

We work with Merton Libraries to deliver creative workshops and free family events in libraries right across the Borough.

Check back here for news and events. 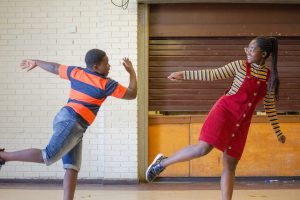 Do you have an idea for a creative project? We could work together to deliver drama, puppetry, dance or craft workshops with young people or families in your community. Please get in touch with Fran Chabrel, Community Engagement Manager to discuss further. 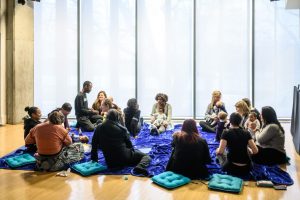 A space for the whole community

Do you run a club or community interest group? Our studios are available to hire at competitive rates with a community/charity discount. With a brand new licensed cafe on site serving hot drinks, cakes and light lunches, Polka is the perfect spot for your club or event.