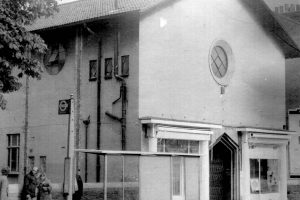 Polka started life as a touring company in 1967, under the Artistic Directorship of Richard Gill. Gill was spurred on by a commitment to fine design and craftsmanship and a passion for puppetry, taking the company’s work to many of Britain’s major theatres. By 1971, Polka was attracting staggering audiences of 250,000 each year.

Gill had a policy of bringing skill, craft and colour to Polka’s touring productions. Now he wanted to do the same to a building which could be a home for Polka’s work. In 1976, Polka found the Holy Trinity Halls in Wimbledon and in 1979, following a lengthy fundraising campaign, Polka’s dream of a permanent home for children’s theatre became a reality. 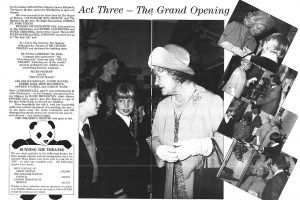 Polka – The Children’s Theatre opened its doors on 20th November 1979. It was the UK’s first theatre venue dedicated exclusively to children. This momentous event was marked by a Gala Performance attended by Her Majesty Queen Elizabeth, the Queen Mother. 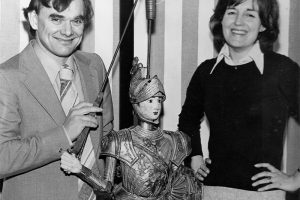 With two performance spaces, a café, a playground, a toyshop and exhibition spaces, Polka was unique in its child-centred design. It quickly became a popular attraction both locally and London-wide, known for the high production values of its puppetry performances, and the exceptional environment in which they were staged.

Now a producing house, its annual programme consisted of seven homegrown productions. Importantly, Polka also provided a permanent London venue for touring children’s theatre companies from all over the UK and abroad. 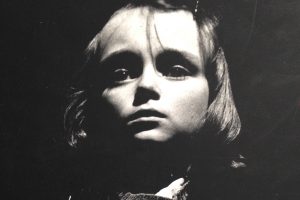 Once established in its own space, the Company quickly began to grow, working with more writers, directors and puppeteers than ever before. By 1983, Polka was regularly programming and producing productions aimed specifically at the Under-5s. The studio, known as the Adventure Theatre, became the designated performance space for this work, and even today it remains the only space in the UK dedicated exclusively to Early Years work.

In 1988, Vicky Ireland joined Polka as the company’s second Artistic Director. Under Ireland’s leadership, the company flourished as a centre of excellence. Productions, now predominantly actor-based and driven by quality scriptwriting, widened in both content and form. In addition to stagings of classic children’s stories, Ireland produced historical and biographical dramas (Rosie Blitz – pictured, with a young Keeley Hawes, Dreams of Anne Frank, Playing From the Heart, based on the life of Evelyn Glennie); adaptations of contemporary children’s books (Three Cheers for Mrs Butler, Kensuke’s Kingdom, Jacqueline Wilson’s Double Act); and devised work – the most remarkable of which was Off The Wall, a co-production with the David Glass Ensemble which took works of art by the likes of Rene Magritte, Henry Moore and Francis Bacon, and brought them to life on stage. 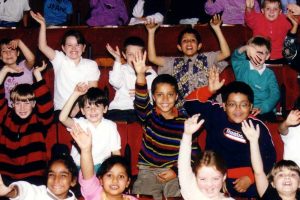 During Vicky’s tenure Polka worked with some of Britain’s leading writers, including Alan Ayckbourn, Philip Pullman, David Holman, Jamila Gavin, Malorie Blackman, Charles Way and Mike Kenny. Vicky’s devotion to quality playwriting was also reflected in the appointment of a Director of New Writing in 2001, out of which Polka’s New Writing Programme was born.

Another notable landmark in Polka’s history came in 1994, when Polka won the Vivien Duffield Theatre Award to begin the pioneering audience development initiative, Curtain-Up! The scheme offers free theatre tickets to disadvantaged schools whose pupils would otherwise not have the opportunity to experience theatre due to financial or other difficulties, supplemented by money to cover transport costs and a free post-show drama workshop to support the visits. The scheme, which still runs, has introduced an estimated 30,000 school children to the magic of theatre since it began. 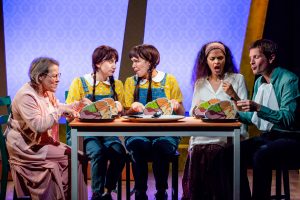 In 2002, Annie Wood was appointed as Polka’s third Artistic Director. Her first major commission was the groundbreaking installation performance piece, Best Behaviour, devised and directed by Mark Storor. Part theatre and part live art, the show took place in the theatre’s foyer, changing the nature of the audience’s relationship with the performers. The action took place in glass cabinets, on tables and chairs halfway up walls, and on ropes suspended from the ceiling. Best Behaviour was hailed as “one of the best pieces of theatre this century” in a five-star review in The Guardian.

Annie extended Polka’s target audience both downwards and upwards. The Adventure Theatre continued to innovate in theatre for babies and toddlers, while the first ‘Polka Teens’ show went into production in the Main Theatre. Meanwhile, a number of productions went out on the road, including UK tours of The Selfish Giant, Double Act and Bad Girls (co-produced with Watershed Productions), and an international tour of Martha’s Wild Goose Chase to Bermuda and the US.

2007 saw the arrival of Jonathan Lloyd as Artistic Director. Jonathan’s appointment led an ambitious and entertaining mix of new plays, adaptations and innovative work for Early Years audiences. Shows included the premiere of Fevered Sleep’s Brilliant; Ghosts in the Gallery by Paul Sirett, a collaboration with the National Portrait Gallery; and Charlie and Lola’s Best Bestest Play which toured nationally and to Sao Paolo in Brazil. Education projects flourished, including Writing the World, a story-writing competition looking at what life is like for children in other countries. Jonathan also launched Freefalling, our flagship Youth Theatre programme for children in Merton at risk of social exclusion.

2009 saw the 30th birthday of the building itself, celebrating 30 years of being a local theatre with an international reputation. 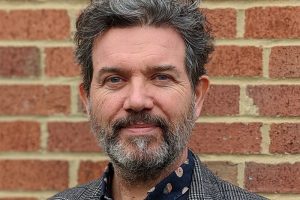 Polka’s current Artistic Director, Peter Glanville was appointed in 2013. Since Peter’s appointment Polka has seen ambitious productions such as Minotaur and Operation Magic Carpet, as well as exciting collaborations such as Dot, Squiggle and Rest with the Royal Opera House. Polka has won multiple awards, including the Eleanor Farjeon Award for Outstanding Service to the World of Children’s Books. In 2016 Polka launched its first biennial Festival of Childhood, bringing together theatre-makers, artists and the world-leading childhood neuroscientists. Brain Waves presented an extraordinary programme of performances, presentations, talks, screenings and interactive workshops about how children and young people’s brains work. 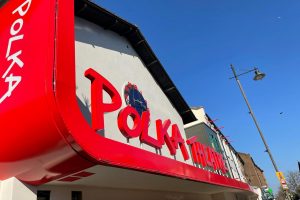 Today, Polka continues to lead the way in producing innovative, high-quality and often daring theatre for young audiences. In 2019 the company celebrated 40 years of Polka with Polka40, a season of participatory work made with the local community. The heart of the company remains rooted at our newly refurbished Wimbledon home.